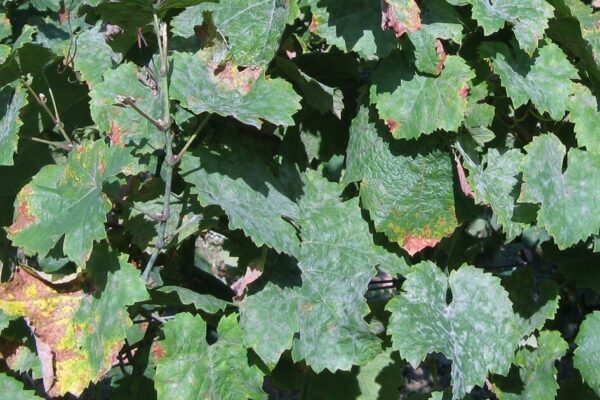 Powdery mildew is an important fungal disease in viticulture, which is known especially by a negative effect on the taste of wine. The infestation is recognizable in the form of a completely floury gray coating on the young shoots of the vine.

However, its similar name to Downy mildew should not lead to confusion. This is because the two fungal diseases differ greatly in terms of their physiology. While powdery mildew belongs to the tubular fungi (pathogen: Uncinula necator), downy mildew is assigned to the egg fungi (pathogen: Plasmopara viticola). The weather conditions that lead to increased disease pressure also differ between powdery mildew and downy mildew.

Powdery mildew has been occurring on cultivated vines in Europe since 1845, leaving considerable economic damage in infested vineyards. Worldwide, Powdery mildew is the most common disease of grapevines. Winegrowers are particularly afraid of the impairment of wine taste. Just 5-10% of grapes infected with powdery mildew are enough to render the crop unusable. Extreme damage frequently occurs, for example, in Portugieser, Kerner, Chardonnay and Trollinger.

The overwintering of the fungus occurs in two ways. In Germany, it is assumed that the fungus mostly overwinters as mycelium (several fungal threads) on the bud scales. Since the fungus does not actually die, unlike Downy mildew , it is not referred to as a primary infection. An initial infestation of young shoots is possible shortly after budbreak. With the beginning of bud growth, fungal growth also begins and the hyphae (individual fungal filaments) spread on the plant tissue. Thus, the Powdery mildew grows directly on the parts of the buds colonized in the previous year. On the mycelium conidia carriers are formed, which carry spores of the fungus.

In addition, overwintering of powdery mildew is possible through the formation of a permanent organ (Chasmothecium, previously Cleistothecium) . The chasmothecia overwinter hanging on the bark of the perennial wood. Warm dry weather in late summer and fall favors this form of overwintering. The hooked appendages of the mature chasmothecia attach themselves to the rough areas of the wood. A minimum temperature of >4°C is necessary for these to lead to infection. In contrast to the first form of development, precipitation >2.5mm is also required. Only then is it possible for the so-called ascospores to emerge from the permanent organ, which in the further course enable the infestation described above.

Sporulation of the pathogen begins from the 6-leaf stage. An infestation is only subsequently characterized by a partially completely mealy-gray coating on the young shoots, which shoots the flag (Fig. 2). But be careful! Often only individual leaf segments are affected, which manifests itself, for example, in the form of growth disturbance. Slightly curled leaf edges and a whitish to grayish, wipeable fungal turf on shoots, racemes and shoots can also be an initial sign of powdery mildew.

In the course of the season, a mealy gray coating, mostly on the underside of the leaf, indicates an infestation with Powdery mildew (Fig. 1). On the upper leaf surface, this infestation by Powdery mildew is then visible by a lightening of the leaf tissue. In warm, dry weather in late summer and fall, chasmothecia also become visible. These can be identified by yellowish and, as they develop, black spots in the white fungal turf (Fig. 3). In winter, you can recognize originally infested canes by red-purple powdery mildew figures on the bark (Fig. 6).

Grape infestation by Powdery mildew is also possible. This inhibits the growth of the berry skin and, as the flesh and seeds continue to grow, the berries burst open. This results in the so-called seed burst and the seeds become visible (Fig. 5).

High pressure weather conditions are particularly favorable. These are associated with dry and mostly sunny weather during the day. At night, on the other hand, temperatures drop and relative humidity rises. Warm daytime temperatures promote mycelial growth, with an optimum temperature of 26°C. The optimum relative humidity for Powdery mildew is between 83 – 86,5 %. While precipitation promotes the escape of ascospores (see above), it is a hindrance to the further development of powdery mildew. The surface-growing fungus is washed away by rain.

Another decisive variable is the wind. The branches growing vertically upwards on the hyphae carry so-called basal cells, which can form new spores by cell division (Fig.4). From wind speeds of 2.3 m/s, these cells can detach. Since conidia sink only very slowly, they can be carried by the wind over very long distances.

Particularly susceptible is the young tissue of the vine, which is still in cell division and elongation growth. Shortly before flowering (BBCH 57) up to the shot size of the berries (BBCH 73) is therefore also referred to as the "Powdery mildew window." Thereafter, susceptibility decreases sharply. From the beginning of sugar storage, the berries also become resistant.

Therefore, the realistic representation of the phenological stage of forecasting models is particularly important. The forecasting system VineForecast maps the vineyard- and grapevine-specific phenology by means of an interaction component and a learning algorithm. Disease models for individual vineyards are therefore tuned to the Powdery mildew window.

Once the cells are damaged, healing is no longer possible or only possible to a limited extent. Preventive (protective) treatment is therefore imperative. A forecasting system can also help in estimating the right time to spray. While many forecasting systems, such as VitiMeteo are based on a local weather stations, VineForecast gives forecasts tailored to the vineyards of a winery. VineForecast also works on a farm-specific spray recommendation (incl. agent suggestion) to control powdery and downy mildew.

Forecasting systems give an impression of the current infestation pressure. Nevertheless, sound technical knowledge is essential. For example, an infestation in the previous year is decisive for the following year. A heavy Powdery mildew infestation can be recognized by discoloration of the wood (Fig. 6). In this case, early treatment at the 3-leaf stage (BBCH 13) is recommended. After years without infestation, it is usually sufficient to start treatment together with Downy mildew. In the pre-flowering stage, the use of net sulfur is recommended as a priority. Due to the lack of resistance development, an important contribution to anti-resistance management is made at the same time. In addition, this achieves good additional effects (e.g., against curl mite). Due to the short duration of action of sulfur, it is recommended to use potent organic fungicides in the Powdery mildew window and in warm dry weather (if possible).

The last treatment should take place around the onset of ripening (BBCH 81). Even if the berries are then resistant, late infestation of the leaves can inhibit photosynthetic performance. In addition, an infestation in late summer/fall leads to the formation of chasmothecia and mycelia and is thus the basis for higher infection pressure in spring. Furthermore, a loose foliage wall, early breakout of flag shoots, and optimal nitrogen fertilization are crucial. 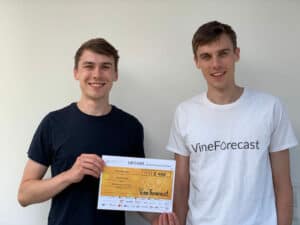